Apple hands out bonuses of up to $180,000 to stop its engineers defecting to rivals 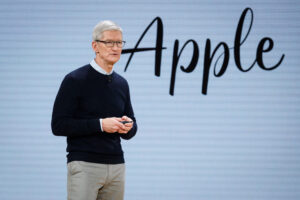 It may be the biggest company on the planet, but that hasn’t stopped Apple giving key engineering workers surprise bonuses of up to $180,000 (£133,000) to stop them defecting to rivals.

The company behind the iPhone has seemed particularly jittery about the threat from Facebook owner Meta Platforms, which needs to recruit thousands of employees to build its new virtual reality nirvana. Meta, which also owns Instagram and WhatsApp, is said to have hired about 100 engineers from Apple over the past few months, notably from its augmented reality, artificial intelligence, software and hardware divisions. Apple has hit back, luring several key Meta employees — with both companies putting the creation of immersive digital worlds at the heart of their strategies.

In October, Mark Zuckerberg, the Facebook boss, changed the company name to Meta Platforms to reflect the group’s latest direction.

Apple, meanwhile, is working on two new products aimed at the metaverse: a virtual reality headset, said to look like sleek skiing goggles; and new augmented reality glasses that will superimpose digital information onto the wearer’s field of vision.

As the war for talent cranks up, Apple has tried to tie in key engineers in silicon design, hardware and essential software, with bonuses spanning from $50,000 to $180,000, according to a report from Bloomberg. Tailored as restricted share options, they vest over four years, aiming to lock in select staff during a crucial development stage for the metaverse.

Shares in Apple, which is valued at $2.94 trillion, could be more alluring too. They are up a third in the past year, outperforming Meta, which is up about 24 per cent, with the group capitalised at only $955 billion.

Apple employees typically receive a pay package spanning a base salary, shares and a cash bonus. Engineers were said to be surprised by the extra award. It is reported to have been handed to the top 10 to 20 per cent of engineers in key divisions and dressed up as a perk for performance.

Apple’s push to have employees back in the office for at least three days a week is also thought to have triggered some defections among engineers, who have preferred to opt for the laxer rules at rival tech companies in Silicon Valley.

Read more:
Apple hands out bonuses of up to $180,000 to stop its engineers defecting to rivals