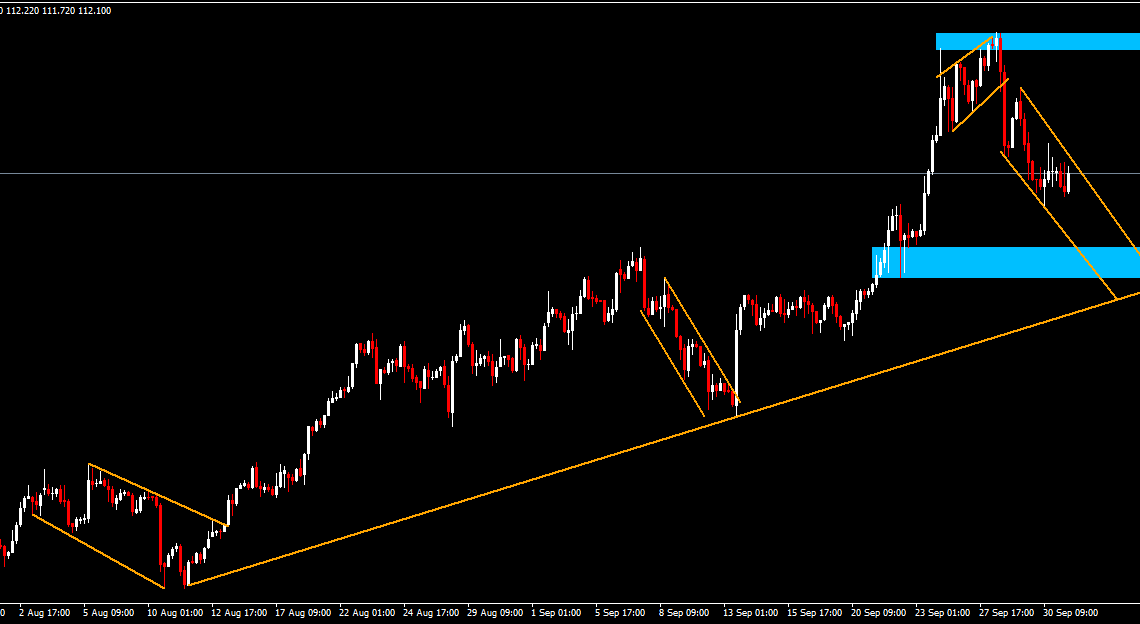 The Dollar heads into Q3 locked in a correction down to the lower end of the range at 110.30.

The Dollar begins the new week and final quarter still riding the wave of gains witnessed last Friday against its peers. This strength is attributed to an increase in consumer spending for the month of August increasing by 0.4% as opposed to the previous month’s data which showed a decrease by 0.2%. These figures are a significant barometer as they account for more than two thirds of economic activity in the country, and essentially back the premise that the Fed’s interventions are working.  With that being said, the Dollar index is still heading towards four consecutive lower days since pulling back from fresh 20-year highs at the 114.55 area.

In terms of market structure, price moved correctively towards the 114.55 area in the form of an ascending-channel reversal pattern. Since then, price has moved off the high aggressively and is now correctively heading towards the lower end of the range located around the 110.30 area in the form of a descending-channel reversal pattern.

Price is still in an uptrend and the probability is for bulls to resume buying at the lower end of the range if the reversal pattern yields an impulsive wave after breaking to the upside. Conversely, if price breaks below the 110.30 area impulsively and breaks the major uptrend too, sellers could take control of the market and drive price down towards the 109.09 area which represents the next higher-low structure.

The Euro kicks off the week with the currency beginning to show signs of stabilizing from last week’s volatility. The European common currency hit a significant low around the 0.955 area last week creating the bottom of a wide range with the high being set around the 0.985 area.

Heading into the week, factors that will be on investors’ minds will be the continued and escalating regional energy crisis driven by the Nord Stream natural gas pipeline damage & Gazprom suspending its energy flows to Italy. Political upheaval stemming from the UK is also weighing down on the bloc as well as averting a potential banking crisis in the form of Swiss banking giant Credit Suisse’s credit default swaps rising substantially to a 10-year high on Friday.

In terms of market structure, price moved correctively at the low of the current range located at around the 0.955 area, in the form of a descending channel reversal pattern. Since then, price moved impulsively away from the low and proceeded towards the high located around the 0.985 area and is now moving correctively at the high in the form of an ascending channel.

Henceforth, bulls could test the upper end of the range until the minor structure fails, which will see sellers take control and drive price back down towards the low again.

Sterling begins the week reaching its highest level in 6 trading days. This exuberance is mainly driven by the UK government rolling back its decision to cut the top rate of income tax, as well as the removal of the highest income tax rate of 45%, which was a controversial move which resulted in a sharp decline of the value of the Pound and UK bonds.

In terms of market structure, price moved towards the low of the current range located around the 1.034 area before bulls took control of price. Since then, the price action seems to be printing out a bearish potential continuation pattern towards the upper end of the range located around the 1.134 area. Henceforth, bulls will challenge the outer trendline of the larger downtrend and if broken more buyers are likely to pick up the currency and drive it towards the 1.169 area. Conversely, if the upper end of the current range holds, sellers will be reintroduced and drive price back down towards last week’s lows.

Gold heads into the new week benefitting from a weaker Dollar since moving off its 20-year highs. Increased demand for the yellow metal is mainly being driven by its safe-haven appeal amid increasing concerns that continued interest rate hikes by the central banks of the world could significantly affect economic growth and trigger a recession with worse economic implications than the current discomfort of inflation.

Henceforth a potential reversal pattern is being printed out and will only be confirmed by a validation of the larger outer trendline as well as a break of the smaller ascending channel to the downside.